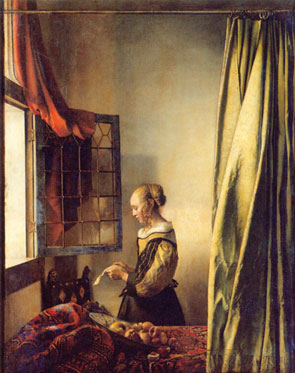 The Representation of the Textile in 17th-Century Dutch Genre Painting

The Ph. D. thesis deals with the representation of textile motives, i. e. the textile handicraft and interior textiles, in Dutch 17th-century genre painting. The textile plays an important role in many Dutch genre paintings: Numerous paintings of weavers, spinners, seamstresses, and lace makers exist by artists such as Johannes Vermeer, Pieter de Hooch, Nicolaes Maes, Gerrit Dou, Quiringh van Brekelenkam, and Cornelis Decker. Moreover, there are many interior scenes showing textiles such as tapestries, rugs, tablecloths, linens, and curtains. Often textile handicraft and interior textiles are displayed in the same painting.

Despite this abundant representation of textile motives in Dutch genre paintings, those images have hardly been studied by art historians. Therefore, this Ph. D. thesis aims at developing an iconography and an iconology of textile motives in Dutch 17th-century genre paintings. I intend to achieve this goal by looking at the social and economic context, by studying contemporary sources such as theoretical texts on art, emblem books, and books of trades, as well as by comparing the representation of textiles by different Dutch genre painters. The chapter on the social and economic context of my Ph. D. thesis will portray the Dutch textile industry in the 17th century including local fabric and imported products. In the chapter on contemporary sources, I will analyse statements on the representation of textiles by theorists such as Karel van Mander, Philips Angel, and Samuel van Hoogstraten. Furthermore, a focus will be set on emblem books and books of trades because they inform us about meanings, often moralising ones, that textile handicraft was associated with.

A particular interest of this Ph. D. thesis lies on the gender of the textile: Dutch 17th-century genre paintings will be analysed with regard to the sex of the depicted figures, as well as to that of the relative artists. Questions arise such as: Does a spinning woman always symbolize the virtues of housewife, whereas a spinning man stands for a wrong world? Do textiles have a different meaning if they are depicted in an interior scene in connection with women or men? And did female artists look at the textile handicraft in a different way than male artists?

In the last chapter of this dissertation, the treated genre paintings will be examined in the context of the paragone as a competition between the arts. It is striking that many artists’ (self-) portraits in the studio show tapestries or curtains in the foreground. These are certainly supposed to demonstrate the skills of the artist. The question is, whether textiles in genre paintings aim at attaining the same goal. There is at least one indication sustaining that assumption: The Dutch 17th-century genre paintings do not show the reality of that time but depict constructed interiors. For example, we see in these paintings rugs on the floor instead of mats which were used in reality. To paint a colourful rug demands much more artistic skills than it does to depict a simple, monochrome mat. This could indicate that textiles were indeed introduced into genre paintings in order to demonstrate the skills of the artist.