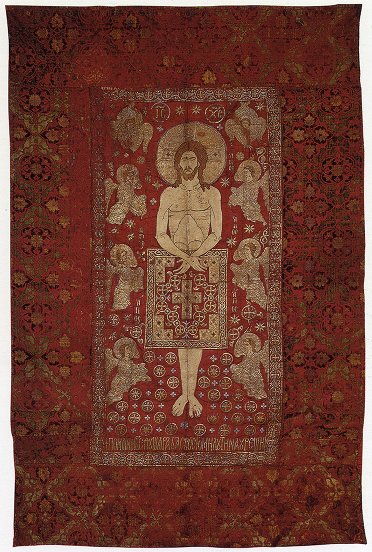 Seeing Through Veils: Liturgical Vision and Mystical Experience in Byzantium

This research project takes as its starting point a fundamental paradox of liturgical vision in later Byzantine art. The sacramental and mystical realities behind the celebration of the Divine Liturgy—the participation of the angelic hosts, the presence of Christ’s body and blood in the bread and wine—are made visible through the images that physically screen the altar, clergy, and Eucharistic elements from sight. This is most apparent in the case of the epitaphios/aër, the large silk veil bearing an image of the dead body of Christ, frequently surrounded by mourning angels. Originally it was carried as a veil for the Eucharistic bread in the Great Entrance, the offertory procession symbolically regarded as a reenactment of Christ’s burial. The same paradox of concealing through veiling applies, mutatis mutandis, to the icon screen or iconostasis, which is conceived of as a firmament separating the realm of the intelligible (τὰ νοούμενα) from the material world, yet shows on its surface painted images of the very heavenly order that it symbolically conceals.

Alongside these liturgical revelations, which we might term the normative mode of revelation in Byzantium, there are the records of mystical vision recorded in saints’ lives, apocalyptic texts, popular tales, and quasi-occult literature. Although far less common that the usual cycles of liturgical images, certain details from these visionary sources appear in the visual arts as well as in literature. The situation of visionary art in Byzantium, however, has been occluded by the emphasis laid—both on the part of Byzantine churchmen and by modern art historians—on the definition of the relationship between image and prototype hammered out in the course of the eighth- and ninth- century struggle over images. This theology justified the sacred image based on its dependence on a real and (once) visible prototype. Categories of visionary representation are necessarily problematic in relation to this definition. How, for example, are we to regard the sporadic appearance of images of the Christ child lying upon a paten and being severed limb-from-limb by the holy bishops of the church? Or, to take a better-known example, how are we to interpret the gesture of the angels’ rolling up the visible heavens in late Byzantine images of the Last Judgment? Neither image is founded on a visible and pre-existing prototype. Both images, however, have precedents in the Byzantine literary tradition and both include the depiction of textile or textile-like veils: the aër partially covering the Christ child who represents the transformed Eucharistic bread, and the starry firmament revealed as an insubstantial scrim hiding the heaven of heavens from view.

Even though the category of “visionary” representation is unacknowledged by Byzantine writings on images, Byzantine artists seem to have employed a system of iconographic signs to signal to viewers that they were representing a different order of reality. In this system of signs, both images of textiles and textile metaphors play a key role. This study, taking the liturgical forms of revelation as a starting point, will explore how textiles and similar veiling devices are used to signal moments of revealing or, conversely, to disclose by their very act of veiling. These habits of visual experience then create a framework in which to understand the visual or iconographic cues used in Byzantine art to signal the presence of a visionary or revelatory moment.